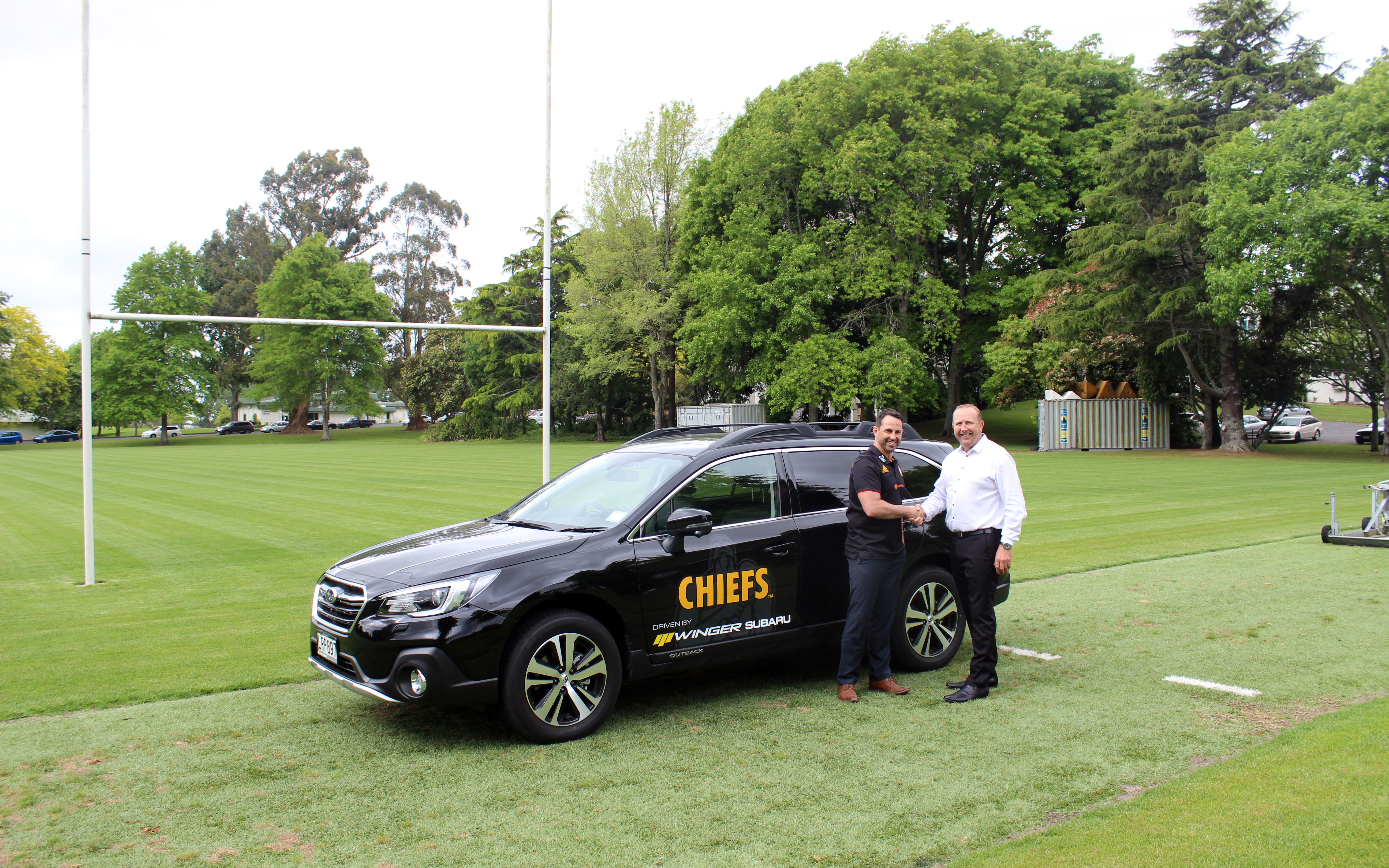 Winger Subaru is set to supply the engines to drive the Chiefs forward this season, with its Hamilton dealership becoming the club’s official vehicle supplier.

The three-year deal kicks off this month and will see the Chiefs supplied with 12 of Subaru’s most popular model – the Outback SUV.

As Hamilton is the home to the Chiefs Rugby Club, one of the five New Zealand franchises in the Investec Super Rugby competition, the local partnership is a natural fit for Winger Subaru Hamilton.

“All of us here at Winger Subaru Hamilton are extremely passionate Gallagher Chiefs supporters and the team are very excited to be supplying their club with Subaru Outbacks. Subaru is a premium brand which is ideal for Kiwi lifestyles which we have become well known for.  We are confident the Chiefs will enjoy driving the spacious, safe and fantastic on-and-off road All-Wheel Drive Outbacks.”

The Chiefs’ region is made up of the provincial unions of Counties Manukau, Bay of Plenty, Thames Valley, Waikato, King Country and Taranaki, with one in every four New Zealanders residing within the Chiefs boundaries. The club’s Super Rugby side, the Gallagher Chiefs have won two Super Rugby championships and have played in the Super Rugby playoffs in each year since the first title was won in 2012.

Chiefs Rugby Club General Manager Commercial Sean Austin says: “Partnerships with organisations who share with us similar values and a passion for being the very best is one of the key engines to drive the Club, both on and off the field.”

“We are therefore excited to be able to welcome Winger Subaru into our whanau of sponsors. We are looking forward to a partnership that is aligned, collaborative and mutually beneficial for both organisations.  On behalf of the Chiefs board; staff and players; members and fans, we thank the team at Winger Subaru for their commitment and support to the club and to the Gallagher Chiefs,” Mr Austin adds.

With a history of customer satisfaction that dates back to 1931, Winger Motors is one of New Zealand’s most significant automotive dealership networks.  Winger Subaru owner Wayne Leach says it is a pleasure to be able to harness the network’s success to help drive forward organisations like the Chiefs.

“A partnership with the Chiefs is a natural fit for the Winger Subaru brand and our customers will no doubt welcome the news that the club will be kitted out in Subaru Outbacks. Many of our Subaru drivers are dedicated Gallagher Chiefs supporters, from the Waikato and it ties in nicely with the fact that our founding dealership, Winger Hamilton is located in the city, where the Club and team is based.  We are excited about the partnership and being able to support the Gallagher Chiefs both from the side-lines and as the official vehicle supplier for the season ahead.”

I’ve worked in the service industry for many years and it’s great when you come into contact with someone who knows what it means. Clint might be the New Vehicle Sales Manager but he took the time to discuss a used vehicle with us and stayed in touch with us providing new options he thought might meet our needs, but wasn’t pushy in any way. We ended up buying a near new car from them, which wouldn’t have happened if it wasn’t for his genuine interest and helpfulness.