We’d heard the stories from Dad about being Lieutenant-General Bernard Freyberg’s driver and how he met Peter Fraser, but we’d never seen a picture.
So how did this long-lost moment in family history come to be rediscovered?

The last thing that Sherryll Leeson expected to see when she opened the motoring supplement of the NZ Herald was a picture of her father, but, set amongst a story on Jeep’s 75th Anniversary, was a picture of then New Zealand Prime Minister Peter Fraser and Lieutenant-General Bernard Freyberg. Pictured at one of the pivotal moments in World War Two, sitting in Willys Jeep, with her father, Driver Ted Leeson, at the wheel.

“I simply could not believe it,” says Sherryll. “We’d heard the stories from Dad about being Lieutenant-General Bernard Freyberg’s driver and how he met Peter Fraser, but we’d never seen a picture. So I discussed it with my sister, trying to work out whether it really was Dad, but when we showed the picture to our mother, she simply said ‘That is your father!”

So how did this long-lost moment in family history come to be rediscovered?

“When we were looking at the history of Jeep we knew we had to talk about its unique war-time record as it was how the company came into being,” explains David Smitherman, Chief Executive Officer of Jeep’s New Zealand importer. “But we also wanted to talk about the New Zealand experience of Jeep so it would be relevant to Kiwis. We were thrilled to discover that New Zealand and Jeep have been together almost from day one of the company and its most famous car. This has been faithfully recorded by the New Zealand National Archive and the National Library of New Zealand.”

“Amongst the many pictures preserved from World War Two was this remarkable picture of Prime Minister Peter Fraser and Lieutenant-General Bernard Freyberg in a Jeep at one of the most significant moments of the war. There could be no better link between Jeep and New Zealand from that period,” says Mr Smitherman.

Searching through the online records of both organisations David Smitherman’s team discovered that the New Zealand defence forces had been one of the first armies outside the US forces to be equipped with the Jeep – so early, in fact, that the official caption on that very first picture of what would become known as a Jeep describes it as an “American Desert Buggy”. The New Zealand armed forces carved for themselves a remarkable reputation as war raged first in North African and then in Italy for being able to deliver vital supplies and rescue wounded troops anywhere and under worst possible conditions.

This reputation was both tested and forged at the infamous battle at Monte Cassino, where from their mountain top stronghold the Germans stalled the Allied advance through Italy for months. During the battle the Kiwi drivers delivered essential supplies and rescued the wounded under fire from the Germans, driving right through the ‘killing zone’ in so-called ‘ghost convoys’ of Jeeps.

During these battles in Africa and Italy, Sherryll’s father had been recruited by the leader of New Zealand’s armed forces, Lieutenant-General Bernard Freyberg, as his driver. This is how just days after the battle of Cassino was finally won, he found himself at the wheel of his trusty Jeep as he drove New Zealand Prime Minister Peter Fraser on his tour of the battlefield to thank the New Zealand Troops.

“Remarkable though this picture is, it is just one of dozens of pictures of Jeeps working with the Kiwi forces in World War Two and among thousands of pictures of the heroic actions of the Kiwis during World War Two now available from the National Library and the National Archive through their superb web sites,” says David Smitherman. “So on behalf of Jeep and the Leeson family may I thank these two superb organisations for their work in keeping such a fine record of New Zealand’s history and one that is so accessible. We can only recommend that these sites must be for the first port of call for anyone looking to reconnect with their family history.”

The full story of how the New Zealand Herald and Jeep reconnected the Leeson family with the picture of their father may be found here: http://www.driven.co.nz/news/news/jeep-s-kiwi-connection/?ref=nzh_networkfooter 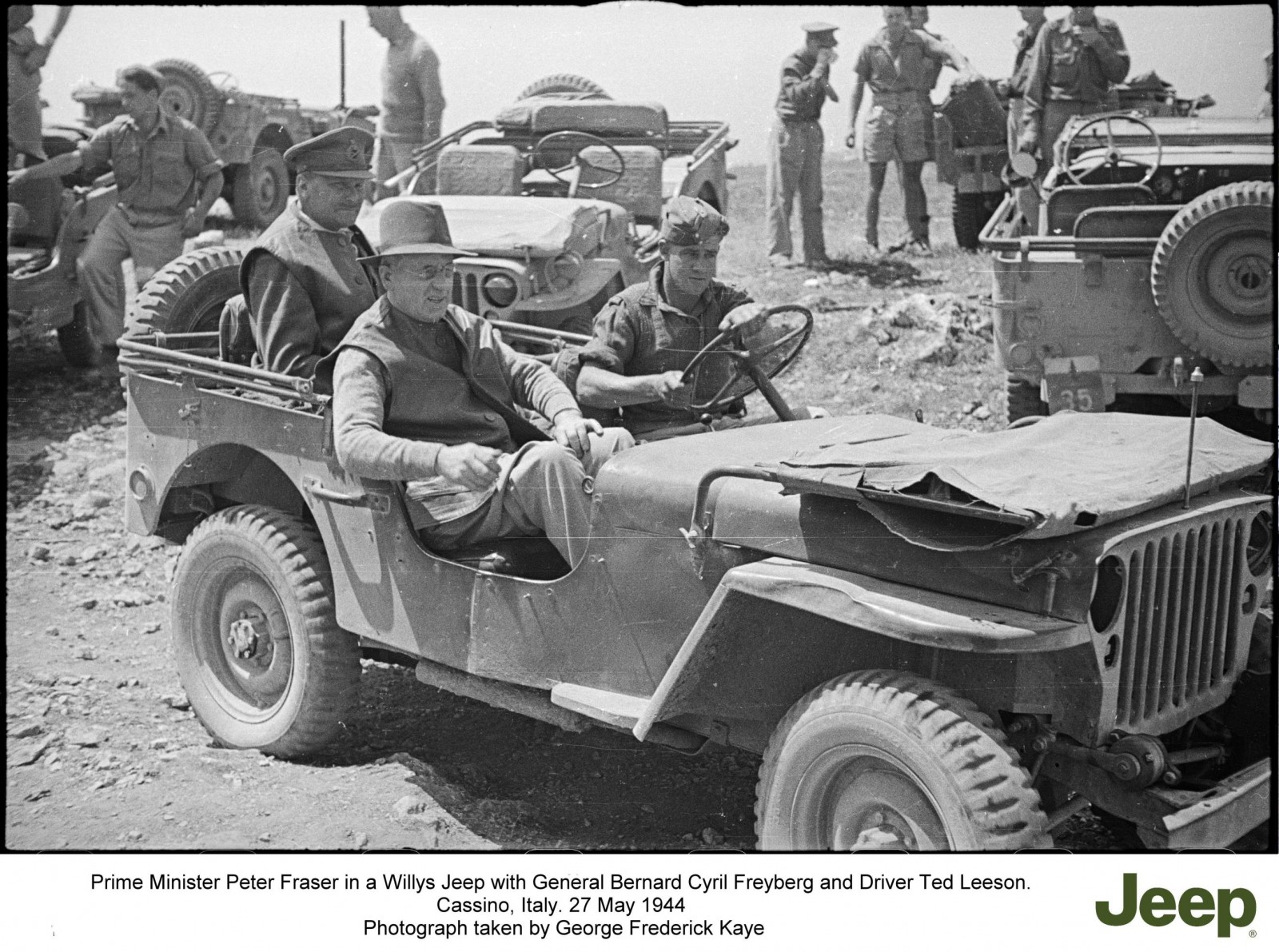