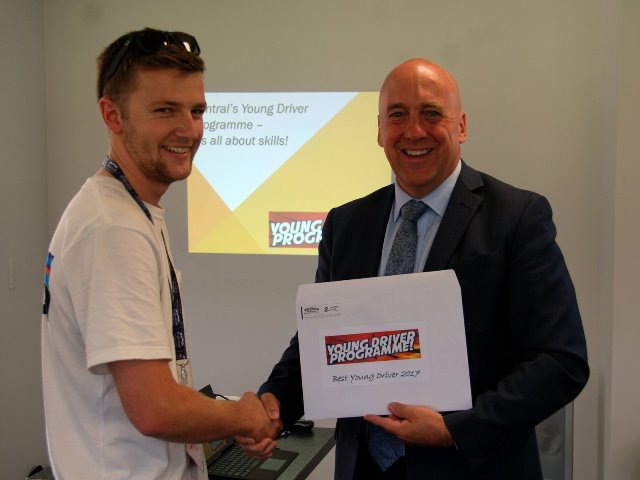 The Central Otago Young Driver programme completed its final day of programme yesterday with the awarding of two titles – Most Improved Driver and Driver of the Year.

Central Otago Mayor Tim Cadogan announced the winners at the prize giving at Highlands Motorsport Park with Chris Small from GeoSolve winning the title of Most Improved Driver and Michael Ward from Winger winning the Central Otago Young Driver of the Year for 2017 (pictured).

Jo Robinson, convener of the competition said she was thrilled that the young drivers had learned so much through the various skills and theory tests done during the competition.

Twenty-eight participants took part in the programme that culminated with the top two in each category undergoing additional skill tests to decide the titles.

Jeff Fleury of the New Zealand Transport Agency said he felt the programme allowed young drivers to learn from skilled instructors in a safe setting.

“Among other things, the young drivers had an opportunity to practise using ABS brakes and Electronic Stability Control in gravel,” said Mr Fleury. “It was a steep learning curve for those with little experience in cars with high safety ratings. As organisers, we hope that when they purchase their next car, they will now think carefully about buying the safest vehicle they can get for the money they have. That alone is a good outcome.”

Graham McNabb, a member of the organising committee said it was fantastic to have so much support and so many volunteers from the community involved.

“We have had very generous sponsorship from Highlands Motorsport Park who donated the use of their facilities and some of their highly skilled staff. We have also had the use of vehicles from Winger’s Cromwell for the events and more than 40 volunteers involved in running the events.  We could not have run the competition without their assistance and they should take credit for their part in its success.”

Brought my new car off these guys had a issue with My radar sensors and they were very nice in helping me fix the issue even kept me up to date with what they were doing and even loaned me a very nice car while they were working on it will recommend winger hamilton to anyone in my opinion and experience I wouldn't buy from anywhere else :)