Fiat 124 Spider. “Our creative mindset is to always innovate..”

The Fiat 124 Spider, will arrive in New Zealand at the end of the year just in time for summer.

“Our creative mindset is to always innovate. ‘Free Like a Bird’ is the first commercial ever filmed literally by an eagle and this distinctive approach demanded music that was equally compelling to serve as the backdrop for the image, and Wyclef Jean enthusiastically jumped at the opportunity, creating a track that is likely to be another chart topper,” said Olivier Francois, Chief Marketing Officer, FCA – Global. “

“‘No Blue Pill Needed’ leverages the strength of the original award-winning ‘Blue Pill,’ advertisement which has over 30 million views on YouTube. Allowing our followers to act as a sound board for our campaigns has proven successful for the brand in the past. Posting longer-form versions of both videos – which first appeared during the reveal of the Fiat 124 Spider at the Geneva auto show and L.A. auto show, respectively – across the Fiat’s digital and social channels gives us the opportunity to see the fans’ reactions to both and inspire our decision when it comes time to select the official television campaign.”

Free Like A Bird | 2017 FIAT 124 Spider | Feat. Wyclef Jean: In an automotive first, the FIAT brand reaches new heights with “Free Like a Bird,” which was filmed by an eagle-in-flight through the mountains of Palinuro, Italy. The 1:22-minute video, with song “Free Like a Bird” feat. Wyclef Jean lives on the FIAT brand’s YouTube channel, in addition to content across Facebook, Twitter, and Instagram (#FreeLikeABird). The spot begins with a bird’s-eye view of a couple traveling through the Italian mountains in an all-new 2017 Fiat 124 Spider. With a subtle nod to the car model’s heritage, a classic 1967 roadster passes by the all-new 2017 Fiat 124 Spider, before revealing the bird’s-eye footage is being filmed by an eagle.

About “Free Like a Bird”
The Fiat proudly worked closely with FREEDOM, a conservation movement that supports and protects threatened birds of prey, to help create the first commercial co-directed by eagles. Three white-tailed eagles – Roi, Victor, and Fletcher – participated in the two-day production. A tiny Sony Action Cam camera, weighing less than 2.8 ounces (80 grams), was placed onto each eagle. The eagles are residents of FREEDOM, whose mission is to protect and reintroduce the endangered birds into their natural habitat and promote the awareness of endangered birds. The eagles featured in the video are currently dependent on falconer Jacques Olivier Travers, who is working to reintroduce them into their natural habitat.

Falconer Jacques Olivier Travers traveled with the white-tailed eagles (not an endangered species), which were trained over a two-week period. The eagles were treated with the utmost care and their safety was a priority at all times. In addition to Travers and three handlers on set, a representative from the Humane Society International was in close proximity to the birds at all times. During the two-day production, the eagles slept overnight in the outdoor garden at Hotel Americana in Palinuro, Italy.

Travers works to introduce endangered birds into a natural habitat and promote the awareness of the plight of the endangered birds of prey. Travers and the white-tailed eagles reside in France, 30 minutes from Geneva, Switzerland. The FREEDOM Conservation has trained eagles for video productions all over the world, from the French Alps to Dubai. More footage from the FREEDOM Conservation can be found here.

The spot was created by Fiat in partnership with FCB Chicago. 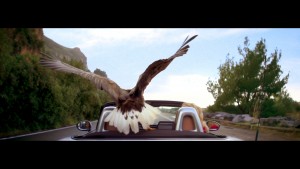 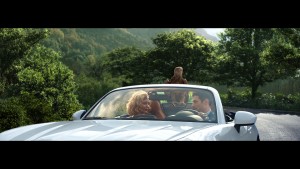 “No Blue Pill Needed”: After finding his bottle of blue pills empty, an elderly gentleman (Nini Salerno and Adele Pandolfi reprising their roles from “Blue Pill,”) spies the all-new 2017 Fiat 124 Spider outside his window and uses it to race away to get more. Along the drive, set to the music “Papa Loves Mambo,” he discovers that his pills are no longer needed. He returns home to his wife and proudly announces that “we’re back” – a nod to the Fiat 124 Spider’s return. Supplementary social content will be posted across the Fiat social channels with the hashtag #NoBluePillNeeded.

About “No Blue Pill Needed”
“No Blue Pill Needed” is a follow-up to the Fiat’s award-winning “Blue Pill” spot featured during the 2015 Super Bowl telecast. The 60-second spot follows the epic journey of “The Fiat 500X Blue Pill” as it slips through the fingers of an amorous Italian, skipping across rooftops, down a drain pipe, bouncing off villa walls, pinging across café tables and eventually dropping into the open fuel tank of a Fiat 500. Given “The Fiat 500X Blue Pill,” the vehicle becomes a “bigger, more powerful and ready for action” 2016 Fiat 500X crossover.

“No Blue Pill Needed” was created by FIAT brand in partnership with Doner. 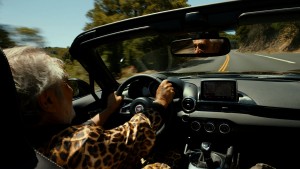 Thanks Winger North Shore for such fantastic service especially from Victoria. We love our new Vitara AWD and can't wait to take it on lots of adventures!!